What comes to your mind when you hear “Jesus?”

I think it’s a good question.

The way we answer that question can help reveal to us what we really believe about him, what we think we know about this man who claimed to be God and saved humanity from eternal damnation.

In my walk as a follower of God, I want to always be seeking out the truths behind who Jesus really is. Because I want to know him as he is, not as he is assumed to be. The beautiful thing is that the truth is hidden in plain sight. The gospels are such a wonderful gift, a gift that deserves not to be skimmed but to be curiously explored. There are so many deeper truths that hide beneath the veneer of mere words. These truths are life changing, but they must be heartily sought after. I’m not saying this has to be a difficult task, only that we must realize that there is more than we’ve seen before. Admitting and believing this, no matter how many times you’ve read the stories and the words of Jesus, is the first step in this journey of exploration. And trust me, it gets really fun when you start to dig things out, to look at the stories from angles you never knew were there. Revelation begins to blossom in your heart and you begin to notice these newfound truths transforming your everyday life.

In the past few days, I’ve had the opportunity to revisit some of the truths that God has shed new light on for me in recent months and years. The cool thing about God is that he’s always adding to our understanding. You think you’ve come to a revelation only to find out at some later time that it was really only the beginning. I love imagining that glint in his eye as he looks at us with such affection and whispers, Oh, but there’s more.

Just the other day I was talking to a friend about how (thanks to author Ted Dekker) I’ve come to understand a new perspective on the story of Jesus calming the storm. I was telling her that when Jesus woke and rebuked the waves and then, in a sense, rebuked his friends for having such little faith, he was in fact calling out their true identity. He was not questioning their faith or condemning them for failing; he was rather reminding them that as sons of God they have the power over the waves, instead of vice versa. What may have sounded like a rebuke was a reminder and a call to embrace their rightful identity and step into a new level of freedom. I know this, I can believe this now, because I understand at least a little bit of God’s heart. His character stands behind his words. That’s why we must search beyond the words. We must seek the very essence and identity of Jesus. What makes him do and say what he does. How one instance, like calming a violent storm for his friends and rebuking them for their lack of faith, is totally linked to another. Like when Jesus told his followers that they were the light of the world, or when he told Peter that he was a rock upon which he would build his church, even though Peter was known for being quite brash.

That’s what he does.

Somehow this conversation led to another that had to do with the Scripture that says, “He (Jesus) learned obedience through what he suffered.” Now this is a statement that begs to be dug up and dissected for meaning. As we were talking, a scene came to mind. This is the scene where Jesus, on his knees in the dead of night in the garden of Gethsemane, is literally pleading with the Father that he would not have to go to the cross. He understood the pain he would have to face—not only physical pain, but that of separation from his Father and of having to carry the weight of so many sins—and he was in anguish. How many people do you know have ever sweat drops of blood? Jesus, being fully human, found his body and soul to be in dire anguish as he pleaded to be spared on the dirt. But the Father didn’t relent, because he had a plan; a beautiful, agonizing plan that would affect all of humanity forever. I believe that this scene is one instance in which Jesus had to face the prospect of suffering and had to make an extremely difficult choice to either obey and trust his Father, or to give into the easier option. And we all know that he chose obedience. He learned it through facing suffering. In this way we can all relate with the man Jesus, and I think that’s a beautiful thing.

The day after my friend and I had this conversation, I heard worship leader and minister Jason Upton speak at a local church, and he referred to these same stories. As he so intriguingly pointed out, if we recall the other part of this scene we remember that the disciples are sleeping as Jesus is crying out to his Father. In the other story, Jesus was the one sleeping while the disciples trembled in fear for their lives. I never before thought about this parallel, and it incited some curiosity in me to dig deeper.

I think one of the truths we can pull from this is how it’s important to be present, or awake to our identity; not only that, but to be aware of what is taking place under the surface in any given situation. In both instances, Jesus was right where he should be. In the boat he was asleep, based on a confidence he carried (tied to his identity) that they were perfectly safe because his Father possessed power over any storm. In Gethsemane, he was awake in the face of deep suffering (which felt threatening, much like a storm) because he needed to claim that identity once more as he surrendered his own will. In both situations Jesus faced a storm. In both he had the power over the storm, only in Gethsemane he had to willingly submit to its harshness.

Whereas Jesus was right where he should have been in both instances, the disciples were not. Unaware of their true identity, they were terrified in their alertness to the storm raging against the boat, and they were asleep in the midst of a defining moment that their dear friend and teacher faced in that garden. If they had been awake, perhaps they would have prayed for him, for his courage. Perhaps they would have understood that the storm that brewed was one they must submit to, and not resist. Resistance always attests to a belief in a false identity, because understanding who we are leads to the comprehension of what we face.

Even so, Jesus did not condemn them. As we see, he loved them through all their mistakes, through all the times they forgot the power they possessed, forgot who they were and hence the significance of the moment. Through every “rebuking” word, he called forth their true identity and destiny, and all because he desired their freedom.

And look what they went on to do, despite how many times they gave into fear or exhaustion in the face of suffering and storms. 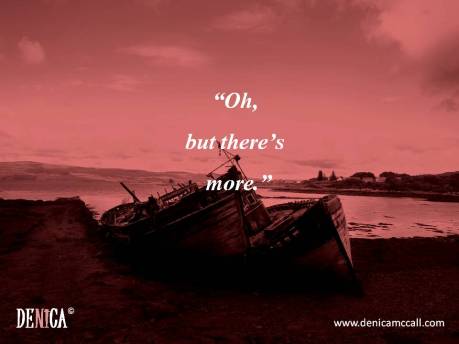 I suppose I’ll just end with this: why don’t we let Jesus be himself with us today? Why don’t we allow him to whisper to us in the wind, to arouse us from our slumber, to call us forth into identity? He intimately understands our suffering and our questions more than we realize, and he wants us to learn the freedom of surrender just as he once did. He loves you, dear child.

See that glint in his eye today.